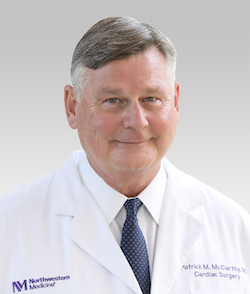 As featured in The Journal of Thoracic and Cardiovascular Surgery, Dr. McCarthy published new research on the prevalence of atrial fibrillation before cardiac surgery and the under-treatment of AFib during concomitant procedures including mitral valve, aortic valve and coronary artery bypass surgery.  Watch Dr. McCarthy explain his findings and recommendations for surgical ablation in the video below.  You can also download Dr. McCarthy's research here (PDF).

The key highlights from Dr. McCarthy's AFib research include:

For the hearing impaired members of the AFibSurgeons.org community, we have provided a written transcript of Dr. McCarthy's video below:

Dr. McCarthy:  Recently, we did a report looking at the frequency of atrial fibrillation before coronary bypass surgery, aortic valve surgery and mitral valve surgery. What we found is that it was far more frequent than we would have thought in the Medicare population. It’s not always detected before surgery. Then also what we are a little surprised at is how infrequently it’s treated. In mitral valve surgery about 35% but in the others, only about 20%. There’s a big gap between what we recommend as a society and what the surgeons are actually doing.

Dr. McCarthy:  The recommendation would be for education of the surgeons. There’s new, better, quicker, easier ways and safer ways to do the operation, so we’re very actively encouraging the surgeons to learn about that.

Dr. McCarthy:  At Northwestern Memorial Hospital, we embraced this early. We did some of the earlier research on it and we’ve developed some of the techniques for how you can treat it quickly and easily and safely for patients. For us, 97% of patients with mitral surgery have the AFib treated and for the other group, it’s a little more complicated, bypass and aortic valve, but it’s still about 70%, 80%, so most are treated.